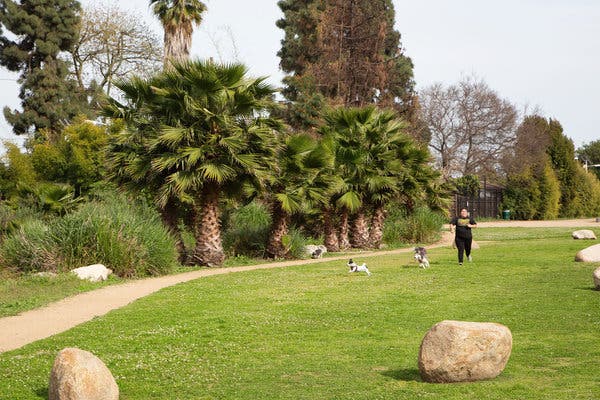 It was 2017, and Ms. Henderson, a sales manager for an HR software company, and her husband, Evan Kress, 42, an engineer who builds telescopes for N.A.S.A., were renting in West Los Angeles. They had their hearts set on Culver City, the neighborhood where she works, but they couldn’t find anything in their price range. Then a couple of friends suggested West Adams, just next door.

One of the city’s oldest areas, West Adams was abandoned by its wealthy inhabitants starting in the first half of the 20th century as Los Angeles expanded. Now, said David Raposa, an agent with City Living Realty, because of a combination of factors — including the construction of the Expo rail line, the area’s accessibility to the tech hubs of Silicon Beach and El Segundo, the development of the areas bordering it, and the Opportunity Zone designations announced in 2018 to spur investment in distressed communities — the working-class neighborhood is undergoing a rapid rejuvenation.

“It was mainly just a very quiet, not terribly in-demand, very sedate, working-class residential neighborhood with a lot of longer-term residents,” Mr. Raposa said. “It’s probably only in the last eight years, maybe 10, since the last recovery started again, that we’ve seen a lot of action, with most of the growth concentrated in the last three years.”

A friend of Ms. Henderson had bought a house in West Adams in 2014, but when Ms. Henderson went to visit, she “didn’t get a great feeling about it,” noting that there were a lot of houses that still had bars on windows. “Even a few years ago it wasn’t what it is today.”

But when, after about $50,000 in renovations, that friend sold her house two years later for a $250,000 profit, Ms. Henderson and her husband knew it was time to take a shot in West Adams. 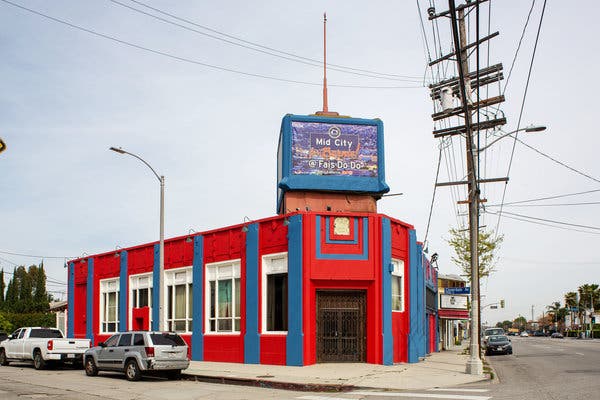 Cafe Club Fais Do Do, a music venue founded by Steven Yablok in an Art Deco-style former bank building, opened in 1990 and has an eclectic line-up of blues, jazz, world, comedy, funk, soul, rock, Brazilian salsa and burlesque.Credit…Beth Coller for The New York Times.

In 2017, they were disappointed when a three-bedroom, two-bath house on the neighborhood’s western edge went to another buyer. But then fate intervened: The deal fell through and the seller came back to them. They paid $745,000.

Now with a 2-year-old daughter and another child on the way, Ms. Henderson is happy with the family’s location — “We can take an Uber for three dollars or walk in and we’re in downtown Culver City” — and flexibility.

“I made the decision to not pay more for a house in a good school district,” she said. Instead, she and her husband can consider private school or, because she works there, Culver City’s well-regarded public schools. Some of their savings will also go toward home improvements, including a new roof, once California’s stay-at-home order is lifted.

Catherine Randall, 31, had been living with roommates since moving to Los Angeles from New York six years ago — first in Laurel Canyon, then in Silver Lake — and wanted her own space. West Adams felt affordable, and it had the diversity she craved. “I wasn’t looking to live somewhere that felt sterile or homogeneous,” she said.

She was tempted to rent one of the accessory dwelling units (known as ADUs) that developers in the neighborhood often add to renovated properties. She looked around, but didn’t love the tight proximity between the main and accessory units she saw: “It still feels like you’re in someone’s hair.” 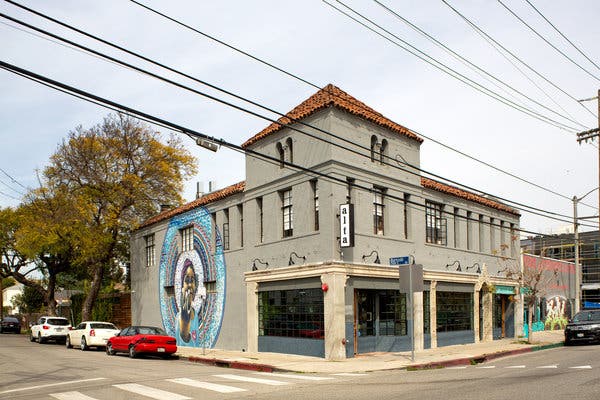 She finally found a bright one-bedroom with large windows and a balcony in a new building on West Adams Boulevard. The monthly rent is $2,095, plus monthly fees of $50 for her dog, Kirby, and $75 for a parking spot.

Ms. Randall laments the lack of bars and green spaces. For the former, she heads to Culver City, Downtown Los Angeles, or to the East Side to meet friends; for the latter, she drives five minutes south to the 400-acre Kenneth Hahn State Recreation Area for her daily run.

“We’re not there yet,” she said of the neighborhood. “Anything that’s not walking the dog or one of the restaurants nearby, I have to drive to.”

Jazzirelle Hill, 28, a corporate lawyer, and her husband, William Hill, 29, a resident in orthopedic surgery, moved from Washington D.C., when he was about to begin a residency at the Los Angeles County + USC Medical Center, a 600-bed teaching hospital just north of Interstate 10. They bought a renovated midcentury-modern style home in West Adams in July 2019.

With her work in Century City and his in Boyle Heights, on the other side of Downtown, one concern was the commute. “We tried to find something that was as central to both of those locations as possible,” she said. “And we realized how much more you could get being a block south of the 10 versus a block north of the 10,” also known as the Santa Monica Freeway.

They paid $805,000 for a three-bedroom, two-bath home in the northeast corner of the neighborhood. Situated on two lots, there’s plenty of space for their new rescue dogs and a baby, expected in July. “It’s definitely a little oasis,” Mrs. Hill said.

Bordered by Culver City to the west, Jefferson Park and Leimert Park to the east, Baldwin Hills to the south and Interstate 10 to the north, the 1.5-square-mile neighborhood is notable for the vibrant commercial districts along West Adams Boulevard and Jefferson Boulevard. Over the past two years, restaurants including Mizlala and coffee shops like Highly Likely have begun to attract people from around the city.

The area is dominated by compact single-family houses, built in the Spanish or Tudor styles that were popular a century ago, with a smattering of multiple-family units. “The homes are smaller versions of what you’d see in Carthay or West Hollywood,” Mr. Raposa said. “With lots from 4,500 to 5,500 square feet, they’re not that big.” Sometimes, newly renovated residences with manicured lawns sit next to older, distressed homes.

Farmdale, a trapezoid of streets on the area’s eastern edge, between Vineyard Avenue and busy Crenshaw Boulevard, is particularly desirable for its large lots, wide streets with single-family homes and walkability. The corridor that hugs La Cienega Boulevard is also popular for its walkability, proximity to Westside Neighborhood Park, Culver City, and Cumulus, a mixed-use development on the corner of La Cienega and Jefferson Boulevards that is slated to bring Whole Foods to the area.

“Prices in West Adams have been on the rise,” said Courtney Poulos, the owner of ACME Real Estate, which just opened an office on Adams Boulevard, citing the area’s affordability and accessibility as major selling points for people priced out of areas where they work or rent. “The entire area is booming, similar to the way that Silver Lake and Echo Park went wild years ago.”

Dominique Madden, who heads ACME’s West Adams location, said the office gets “a lot of people who are renting in Silver Lake, renting in Los Feliz, renting in West Hollywood but are priced out of where they live” when they decide they want to buy. 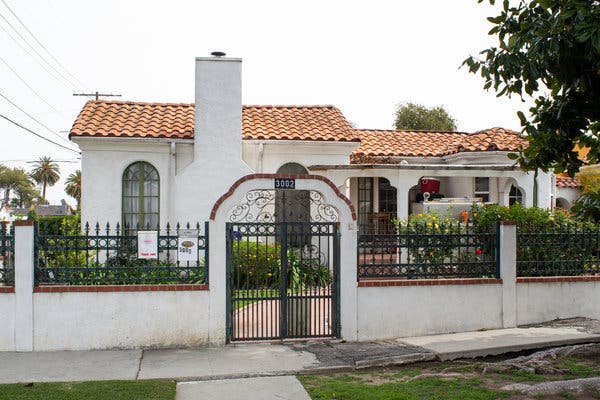 About 40 percent of the neighborhood’s housing stock is rental, said Claire Lissone, owner of Real Estate Collective, in West Adams. Of those rentals, nearly half are single-family homes, while the rest are in multiunit buildings. A recently remodeled, 1,300-square-foot house averages around $3,500 to $4,500 a month, she said, while a 700-square-foot one-bedroom rents for about $1,700 to $2,000 a month.

“There is definitely a sense of pride in the neighborhood,” said Mrs. Hill.

New restaurants, including a reimagined Johnny Pastrami and a branch of the San Francisco-based Thai restaurant Farmhouse Kitchen, are planned for Adams Boulevard. And Sweet Greens and the Real Real, a luxury consignment shop, are both setting up offices in the neighborhood.

“It’s still an area in transition,” said Tia Hughes, an agent with Compass. “It’s not perfect, but you can see that people are investing in the neighborhood and that it’s on its way to becoming a great neighborhood.” 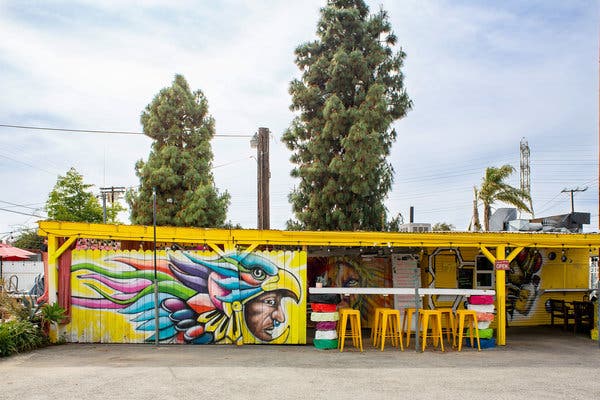 Bee Taqueria, a colorful taco stand from the chef Alex Carrasco, who hails from Mexico City and has worked at Scratch Bar & Kitchen and Osteria Mozza in Los Angeles, showcases a menu of intriguing tacos on handmade blue corn tortillas.Credit…Beth Coller for The New York Times

High schoolers attend Susan Miller Dorsey High School, where during the 2017-18 school year, 25 percent of students who took the SAT exam met benchmarks for English and 12 percent met benchmarks for math. (For the SATs, the College Board defines students as “college ready” when their test scores meet a benchmark of 480 in English and 530 in math).

West Adams is just below Interstate 10, putting Santa Monica and Los Angeles’s beaches, and Downtown Los Angeles, 30 minutes away. Los Angeles International Airport is 20 minutes away, while Hollywood, Brentwood, and the San Fernando Valley may take up to 45 minutes in traffic. Culver City is less than 10 minutes.

Four stations of Metro Rail’s E (Expo) line serve the area — La Cienega/Jefferson, Expo/LaBrea, Farmdale, and Expo/Crenshaw — offering access both to Santa Monica and Downtown Los Angeles, with a fare of $1.75 each way.

Laura Meyers, director of communications for the West Adams Heritage Association, said that before World War I, the area west of Crenshaw Boulevard was known colloquially as the Cienega District.

Unlike the wealthy West Adams district to the east of Crenshaw Boulevard, the Cienega District was home to cattle ranches, a 20-acre slaughterhouse and Bonita Meadows, a dairy farm, part of which was subdivided for housing by the developer Carlin Greer Smith. He called the area “the West Adams extension district,” and lobbied the city to annex the land, which it did in 1918.